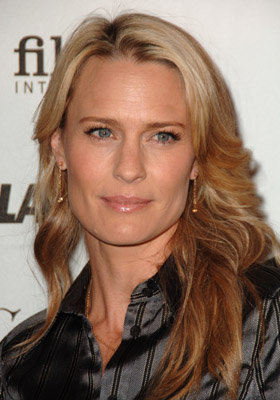 Robin Gayle Wright was born in Dallas, Texas, to Gayle (Gaston), a national director at Mary Kay, and Freddie Wright, a pharmaceutical executive. She grew up in San Diego, California. She started her professional career as a model in 1980 at age 14, and worked both in Paris and Japan. After finishing high school she decided to become an actress. She got a role on the soap opera Santa Barbara (1984), for which she was nominated three times for a Daytime Emmy. During the first season of the show, she fell in love with fellow cast member Dane Witherspoon, whom she married in 1986. Meanwhile, she starred in The Princess Bride (1987), playing the title role. After leaving the cast of Santa Barbara, she got the starring role in Denial (1990) alongside Jason Patric. In 1990, she was in State of Grace (1990), where she met actor Sean Penn, by whom she had a daughter, Dylan Frances, and a son, Hopper Jack. After taking some time off, Robin was back to Hollywood with one the best roles of her career: She played Tara in The Playboys (1992). She was extremely stunning and brilliant. Then, she acted in Toys (1992) with Robin Williams, and she gave a funny performance. In 1994, Wright was in the blockbuster hit Forrest Gump (1994), with Tom Hanks. For her performance as Jenny, she got a nomination for a Golden Globe Award. She got a small role in The Crossing Guard (1995), which starred Jack Nicholson. After turning down 14 roles, she played the title role of MGM/UA’s Moll Flanders (1996), directed by Pen Densham, and co-starring Morgan Freeman and Stockard Channing. She then starred in Erin Dignam’s Loved (1997), with William Hurt.